vera cohen Manchester City pay tribute to lifelong fan and the club's oldest mascot Vera Cohen, who has died at the age of 104. 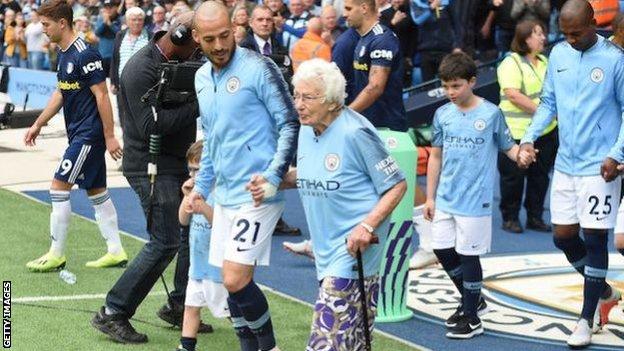 Manchester City have paid tribute to lifelong fan and the club's oldest mascot Vera Cohen, who has died at the age of 104.

Vera led the teams out alongside her sister Olga Halon when City faced Fulham at Etihad Stadium in 2018, when she was 102.

She was a City season-ticket holder for almost 90 years.

"We are saddened to learn of the passing of lifelong fan Vera Cohen," the club said.

"Vera was a much-loved member of the City family and everyone at the club would like to send love and best wishes to Vera's family at this difficult time."

Vera was famed for her baking skills, and raised money for Manchester's Christie hospital through her bakes.

In 2017, then captain Vincent Kompany visited Vera and Olga at their home for a cup of tea.

After accompanying former City midfielder David Silva onto the pitch before the Fulham game, Vera embraced manager Pep Guardiola in the dugout before kick-off and she and Olga spoke with him after the game.

"Pep said hello to me and I said 'thank you for all you've done for this team'," Vera said. "Things used to be very different from how they are today. They didn't have a scoreboard when I first came - a man used to come around with a blackboard with the score on it!"